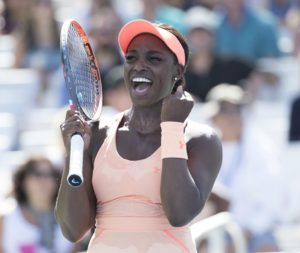 So on Saturday I watched Sloane Stephens win $3.7 million for her two set victory at the US Open. As I watched her exuberance at getting that check, I thought, crap that poor child doesn’t know she’s lost half of it already to taxes: federal and maybe state. She splits time between Florida and California and Florida has no state income tax. Hopefully she gets a break there. But she’ll get no break from Uncle Sam. She worked hard for that money to just have to send almost half of it to the United States Treasury. Of course she will be able to lower the amount by deductions, but because she used her labor to produce the income, she’s basically screwed.

Most Americans with that level of income will pay a lower tax rate than she does because most millionaires get a portion of their income not from their labor but from investing in the stock market. Stock market income is taxed at a lower preferential “capital gains” rate of at least 20% with a possibility of it being as high as 23.8%. Sloane’s last dollar of income will be taxed at 39.6% under our so-called “progressive” tax system. When you make money investing in the stock market you are not really exerting yourself the way that Sloane was on Saturday. But our tax laws have a bias against labor and in favor of capital like stocks. That’s one element of the current fight about reducing our corporate tax rate. Are shareholders shouldering too much of the corporate tax burden and entitled to a tax break? Spoiler alert: I don’t think so.

About half of all Americans own stock either directly or in retirement accounts.

Our tax law bias against labor and in favor of capital also results in a racial disparity. A higher percentage of whites have stock investments than blacks. As I’ve described in prior research, a higher percentage of whites own stocks than blacks, Latinos, and other people of color, even after controlling for income. Middle-income whites are more than twice as likely to own stocks as middle-income blacks. Another study showed in 2010 stock ownership represented 18.3% of white household assets, compared with 5% of black household wealth. So instead of Sloane working her you know what off on Saturday, if she was at the spa letting her investments work for her, she gets to keep more of her money. But ours is a society that claims to reward hard work. Go figure

About the Author: Dorothy Brown

Dorothy A. Brown is a Professor of Law at Emory University School of Law and an advocate for economic and social justice. She is well known for her work in a variety of areas: the effects of tax policy by race, class, and/or gender; workplace equity and inclusion; and law school reform. She is the author of the path breaking Critical Race Theory: Cases, Materials and Problems currently in its third edition, which applies a racial lens to foundational law school courses such as contracts, property, civil and criminal law and procedure.